A high-quality, credible VA Nexus Letter written by a qualified medical professional is arguably #1 way for veterans to prove service-connection, aka, the “Nexus” requirement under the law.

Many veterans are denied service connection by the VA because they failed to show a clear nexus (logical link or connection) between a current disability and their active duty military service.

But regardless of how many times you’ve been denied service connection, there is still hope!

>> Looking for a Doctor Who Can Write a VA Nexus Letter? <<

What is a “Nexus” for a VA disability claim?

According to the VA, a “Nexus” is simply a logical link or connection between a veteran’s current disability and an in-service incident, event, or injury.

To be eligible for VA disability compensation benefits under the law, a veteran must prove that their disability was caused or made worse by their active duty military service.

Did you know that a VA Nexus Letter and an Independent Medical Opinion (IMO) are the SAME THING (the terms are sometimes used interchangeably)?

In our experience, a credible VA Nexus Letter is the single most crucial document a veteran can provide the C&P examiner and VA Rater to help prove service connection on an “at least as likely as not” basis.

What is a VA Nexus Letter?

A VA Nexus Letter is an evidence-based document prepared by a competent and credible medical professional that helps to establish a “connection” between the veteran’s current disability and their active duty military service.

A VA Nexus Letter is often the “essential” piece of credible evidence needed to help a veteran get their VA disability condition service connected under the law.

WATCH: What is a Nexus Letter?

Why do I say this?

Because VA disability claims are won or lost because on MEDICAL EVIDENCE.

Either you have enough medical evidence or you don’t!

A great VA nexus letter IS medical evidence and can influence the C&P examiner’s medical opinion, as well as the VA Rating Official’s final disability decision, due to the medical nexus evidence provided in the letter.

The most credible VA nexus letters list medical research studies, scientific journals, or previous BVA case law precedent that describes the medical etiology of the veteran’s condition, and the relationship to the veteran’s military service.

Make sure the medical professional writes one of five statements of likelihood in the VA nexus letter to help the veteran prove service connection under the law, preferably, the words “more likely than not.”

VA Nexus Letter Key #4: The doctor should list his/her credentials, such as job title and specialty

The doctor must sign and date their name, in addition to listing his/her medical credentials, such as, Oncologist, Orthopedic Surgeon, Sleep Specialist, PA-C, MD, etc.

This is a particularly important part of the VA nexus letter because it helps the VA Rating Official determine if it’s competent and credible for VA rating purposes.

The 5 Statements of Likelihood for a VA Nexus Letter

When asked to give an independent medical opinion as to whether a veteran’s condition is related to a specific incident during military service or another service-connected disability, the medical professional should express his/her medical nexus opinion with one of the following 5 statements of likelihood:

The VA nexus opinion “is due to” means the doctor is 100% certain that a veteran’s condition was caused or made worse by active duty service or by another service-connected disability for secondary service connection.

The nexus opinion “more likely than not” means the doctor believes there is a greater than 50% chance that a veteran’s condition was caused or made worse by active duty service or by another service-connected disability for secondary service connection.

The VA nexus letter opinion “at least as likely as not” means the doctor thinks there is an approximate even balance of medical evidence for and against, and thus, there is a 50/50 chance that a veteran’s condition was caused or made worse by active duty service or by another service-connected disability for secondary service connection.

This is the minimum nexus statement that will help a veteran prove service connection, because the Benefit of the Doubt always goes to the veteran according to VA law.

When all things are equal, tie goes to the veteran!

The nexus opinion “less likely than not” means the doctor thinks there is a less than 50% chance that a veteran’s condition was caused or made worse by active duty service or by another service-connected disability for secondary service connection.

This statement will likely cause the VA Rater to deny service connection, unless one or more other medical opinions carry more weight (higher probative value) or contain different medical opinions.

The nexus opinion “is not due to” means the doctor thinks there is a 0% chance that a veteran’s condition was caused or made worse by active duty service or by another service-connected disability for secondary service connection.

This statement will cause the VA Rater to deny service connection.

???? VA Claims Insider Elite can help you win, service-connect, and get a higher VA disability rating from the VA. We can also help you with the medical evidence needed to WIN your appeal.

???? Get FREE VA benefit claim resources at our website!

???? We go *LIVE* every Tuesday and Wednesday on the VA Claims Insider Facebook Page!

✅ Sign up for VA Claims Insider Elite, get instant access to the ELITE Experience Portal (EEP) and $13,119 worth of proprietary VA claim resources TODAY for FREE, and have our medical team get started on your VA disability claim now: 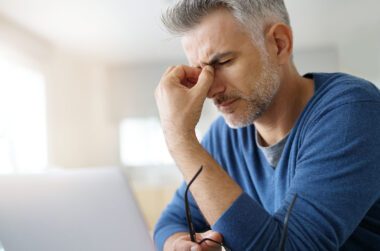 Brian Reese here with VA Claims Insider, and in this expert-level post, I’m going to reveal and explain how to service connect Migraines Secondary to Tinnitus for VA disability, even if you’ve... continue reading 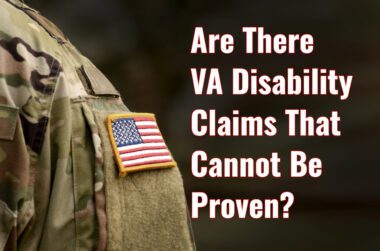 Are There VA Disability Claims That Cannot Be Proven? Here’s the 6 Key Elements Needed to Get Your VA Claim Approved

You might be wondering: “Are there VA disability claims that cannot be proven?” The short answer is no. Why? Because if you have no evidence (no proof), your VA claim will be... continue reading