What is a Buddy Letter for PTSD?

A VA buddy letter for PTSD a credible statement to support your VA claim for PTSD, written by a competent individual 18 years of age or older.

The buddy must have first-hand knowledge of your PTSD, the incident that caused or made your PTSD worse in the military, as well as your current level of occupational and social impairment.

The buddy then offers an account of what they witnessed or are witnessing in support of a veterans VA disability claim for PTSD.

A VA buddy letter for PTSD can be from a fellow service member, spouse, friend, pastor, co-worker, boss, adult child, or any other competent and credible witness.

A buddy letter for PTSD is sometimes called a “stressor statement for PTSD” and can be the linchpin to winning your VA disability claim for PTSD.

Because a buddy statement constitutes “lay evidence” under the law, which simply means “after the fact” evidence.

The Rating Veteran Service Representative (RVSR) at the VA MUST consider a buddy letter for PTSD because it’s defined in M21-1 as a secondary source of evidence in support of your VA disability claim.

Veterans might also want to read, >> The Value of Submitting a Personal Statement. <<

Listed below are the 4 essential elements of a buddy letter for PTSD, along with an example.

How to write a VA buddy letter for PTSD.

When writing or obtaining a buddy letter for PTSD, you can simply use the VA Form 21-4138, Statement in Support of a Claim.

Guess what I think?

I think they are WRONG.

The VA Form 21-4138, in official .pdf format, is still the PREFERRED method of personal statements and buddy letters according to Rating Veteran Service Representatives (RVSRs), aka, VA Rating Officials.

A great VA buddy letter for PTSD is short and sweet.

RVSRs are very busy people, so you want to give them the exact information they need, when they need it, to help support a Veterans VA disability claim for PTSD.

In 3-4 paragraphs, you should explain (1) Your name, information, and how you know the veteran. (2) What you witnessed or are witnessing, (3) The veterans’ current symptoms of PTSD, and (4) sign and date your name to the best of your knowledge and belief.

Listed below is a PTSD buddy letter example:

Part 1: How do you know the Veteran?

In part 1, you need to explain how you know the Veteran.

“My name is Jim Smith, and I served with [INSERT VETERANS NAME] during Operation IRAQI FREEDOM.

I have known [INSERT VETERANS NAME] since 2003, because we served together in the U.S. Army, 82nd Airborne Division.

We became very close friends, especially since we were both part of the initial invasion of Iraq in early 2003.

Part 2: What you witnessed or are witnessing.

In part 2 of a buddy letter for PTSD, you need to explain in detail what you witnessed or are witnessing regarding the event or incident.

You do NOT need to explain every detail.

“When I first met [INSERT VETERANS NAME], he was happy, fun, excited about life, and did not have any symptoms of PTSD.

All of that changed in August 2003, when he was a part of a convoy that was hit by an IED outside of Basra, Iraq.

Shortly after this incident, it became very evident to me that he suffered from severe PTSD, to include depression, anxiety, panic attacks, memory loss, difficulty remembering events, and nightmares, among many others.

I encouraged him to get help and seek treatment many times over the years, but he was embarrassed and didn’t want to have a label attached to his name.”

Part 3: The veterans’ current symptoms of the disability.

In part 3 of your PTSD stressor statement, you need to explain the veteran’s current symptoms of the disability.

Again, you do NOT need to explain every detail, just the things you know about.

“Upon his return to the United States, his life began to crumble, culminating in a divorce from his wife of 10 years.

I attempt to reach out to him on a regular basis, but my messages typically fall flat, and we haven’t seen each other for nearly 5 years.

I spoke with him a few months ago, and we cried together on the phone. He can’t sleep, has no friends, has severe depression and anxiety, and is often afraid to leave his house. The good news is he is seeking treatment for PTSD at a local VA clinic and is presently in therapy for combat PTSD.”

Part 4: Sign and date your name to the best of your knowledge and belief.

In part 4 of your buddy letter for PTSD, you simply sign and date your name.

“I CERTIFY THAT the statements on this form are true and correct to the best of my knowledge and belief.”

Having trouble proving your PTSD non-combat stressor? Click HERE to read how! 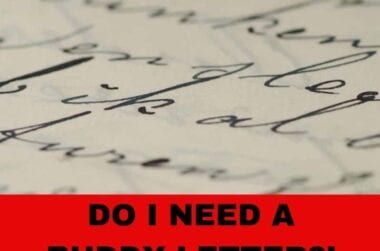 Is a Buddy Letter Important?