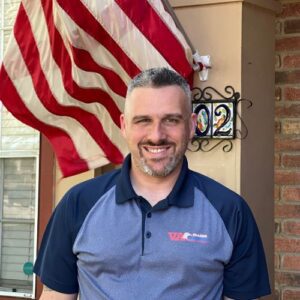 A little about Ian

I was 26 when I joined the US Army in Feb 2005. I served 11 yrs 7 months. I joined to start a dog breeding business for Siberian husky’s. My job was 91D or Power Generation Equipment Repairer. Saw amazing places and met and learned from a lot of great people.  Spent 15 months in Iraq and 1 yr in Afghanistan in my time as a soldier.  Became an NCO or Non-Commissioned Officer in 2010.  Spent many hours on the computer to complete all the work needed to become a Sergeant in the Army.  That drive and motivation are what made me the best NCO I could have been.  I held positions such as Squad Leader, Shop Foreman, and Platoon Sergeant.  I was in charge of as many as 40 soldiers.  But due to injuries sustained in combat, my career ended in December of 2015 when I medically retired from the Army. I served 11 yrs in the US Army as a 91D or Power Generation Equipment Repairer.  Due to injuries sustained in combat in 2009, I was medically retired in 2015 at Ft. Hood, TX.

Never underestimate your enemy no matter what you are told by others. I served with B TRP 3/61 CAV 4thID at a remote COP Keating which was recognized as one of the most decorated units to include 2 medals of honor to living soldiers. The movie “The Outpost” is about our unit and the attack on COP Keating.

I found that the process with my VSO was not working. Not to mention the fees associated with getting my IMO completed were outside what I was willing to pay. I was seeking employment in the tech sales field and found VACI.  I thought to myself I’m a vet that could help other vets get what they deserve, so I applied and now I’m doing what I love to do every day. Talking to veterans and getting what they deserve.