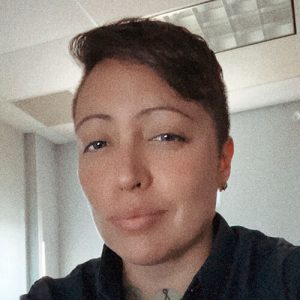 A little about Dina

Hello there! My name is Dina Juarez and I am from Kansas City, Kansas. I am covered in tattoos and I love traveling. You can find me in the gym or on my laptop studying.

I have been in the military for 15 years now. I was prior Air Force and decided to go Army after enrolling at Park University years ago. I am currently working on my Ph.D. in Public Policy and Administration. I have worked with a number of organizations around the Kansas City area with other Veterans.

I love meeting new people. So getting the chance to work alongside those with a similar outlook and wanting to do something meaningful is awesome.

I enlisted in the Air Force in 2007. After deciding to go to college, I transferred to the Army and have served ever since. I started in aviation resource management in the Air Force. Eventually, I ended up as Military Police for the Army, after going to Infantry school twice later in my career. I joined the military for a few reasons, including getting some structure in my life. My grandfathers both served, my father served, and two of my brothers.

The most inspirational experience has been looking back at my time in service and reflecting on what I have done. I was one of the first few females getting a chance to go through infantry school towards the end of my career. In the beginning, I went through Don’t Ask, Don’t Tell. I was part of two State of Emergency Duties, went overseas, and returned to have hip surgery.

The transition in itself has been life-changing and mentally daunting. I do have service-connected disabilities. From my eyes, PTSD, hips, ankle, knees, and back. Filling for my VA disability was a process that took over a year. No, I was not a former client of VACI.